The register just ran an article (IE8 bug makes 'safe' sites unsafe) talking about a flaw in Internet Explorer 8's XSS filtering. I have researched the IE8 filter in the past and provided some of my thoughts on the matter.

As the article correctly states, I'm not aware of the actual flaw that has been discovered. According to the article, the flaw was made available to Microsoft several months ago and we can presume Microsoft is actively working on a solution.

With that said, I thought I would discuss some of the technical anomalies of IE8 XSS filter so that an organization can begin to evaluate if they should, at least temporarily, disable the IE8 XSS protection for the users of their site.

The intent of IE8's xss filter is to provide a feature which "makes reflected / “Type-1” Cross-Site Scripting (XSS) vulnerabilities much more difficult to exploit from within Internet Explorer 8." [blogs.msdn.com] I believe this is a noble goal which is similar to the noScript plugin for Firefox. The blog on msdn.com has a good example of the filter working as intended. The demo application has a reflected XSS vulnerability when accepting user data from the URL and returning it to the page without output encoding - classic XSS. IE8 xss filter detects this and safely renders the attack harmless.

How The Filter Works

Now let's take a look at how the protection works in the field. Luckily we have two sites available to illustrate the functionality. Google has turned off the XSS filter, with the header X-XSS-Protection: 0, whereas Yahoo has allowed IE8 to use the XSS filter as designed.

The following two links illustrate the changes that are made by the XSS filter when an attack is detected. Each link is the URL when searching for test<script>

http://search.yahoo.com/search?p=test%3Cscript%3E
[edit: 1/13/2010: It looks like Yahoo has also decided to disable IE8 XSS protection. Therefore the above link will not work to illustrate this example. Glad I captured the screenshot below. However, you can check out a similar example with Facebook] 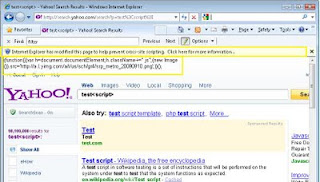 The screenshot above shows the results when following the yahoo link. The reason that we see JavaScript on the rendered page is because the IE8 filter has performed a blanket replace of <script> with <sc#ipt> throughout the entire response. This does in fact render most XSS attacks inert, but it also has the unintended consequence of disabling all JavaScript on the resulting page.

Here is a snippet of the html from the Yahoo page. The change made by the filter is highlighted in bold. If you were to search through the entire response you would see that all <script> have been replaced with <sc#ipt>. Also, the final line with the "Search results" is an html entity encoding of the search value. This is performed by the yahoo page and unrelated to the IE8 filter. This is just yahoo practicing good design.

What's the Risk with the Filter?

There are two possible concerns that should be considered:
1. Is there a potential flaw in the output encoding that is being performed by the filter?
2. Does the act of disabling all script tags throughout the page actually introduce a new vulnerability?

A very basic example of this concept is a regex that would remove the first instance of the word "script" from a tag. If an attacker submitted <script> this imaginary filter would output <>. This would stop a basic attack. However, if an attacker submitted <scriptscript>then the resulting value would be <script> - which would be malicious. This is the idea of potential flaw #1.

#2
The second concern is that disabling JavaScript throughout the page will inadvertently introduce a new vulnerability. Consider a scenario where an application relies heavily on AJAX. What would happen if JavaScript was suddenly disabled as a result of the XSS filter? More than likely this would just break the page. This isn't a security concern, but a usability concern. I think I'm ok with the trade-off of usability and security for this example.

Should Your Site Disable The IE8 XSS Filter?

I wouldn't rush to judgment and disable the filter. At this point we have word that there is a potential weakness and it is being addressed by Microsoft. We don't know of a public exploit at this time and hence can't thoroughly evaluate the impact to our respective applications. I think it would be prudent to review the impact of the XSS filter on your particular application and determine the effects of suddenly disabling the script tags within the page. More than likely this will result in the page not functioning correctly. But hey, that's not so bad if it protects the user from XSS compromise.